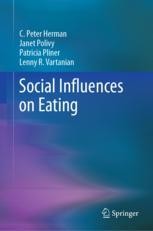 This book examines how the social environment affects food choices and intake, and documents the extent to which people are unaware of the significant impact of social factors on their eating.  The authors take a unique approach to studying eating behaviors in ordinary circumstances, presenting a theory of normal eating that highlights social influences independent of physiological and taste factors.

Among the topics discussed:

Social Influences on Eating is a useful reference for psychologists and researchers studying food and nutritional psychology, challenging commonly held assumptions about the dynamics of food choice and intake in order to promote a better understanding of the power of social influence on all forms of behavior.

Show all
About the authors

C. Peter Herman (BA Yale, 1968, PhD Columbia 1972) taught at Northwestern University from 1972 to 1976 and at the University of Toronto from 1977 until his retirement in 2012.  His research (supported from 1978 to 2019 by the Natural Sciences and Engineering Research Council of Canada) focuses on eating and dieting, with a particular interest in acute situational influences on eating, including social influences.  He has served as editor of The Journal of Personality and Appetite.

Janet Polivy, PhD., FRSC (Fellow of the Royal Society of Canada), B.S. Tufts University (1971), Ph.D. Northwestern University (1974). Janet Polivy was an Assistant Professor of Psychology at Loyola University of Chicago from 1974-77, and at the University of Toronto from 1977-1980, where she served as an Associate Professor until 1985, and a Full Professor of Psychology and Psychiatry at the until her retirement in 2013, when she became a Professor Emerita.  She was elected to the Council of the College of Psychologists of Ontario in 1994, where she served two 3-year terms, and was Chair of the Registration Committee, Fitness to Practice Committee, Government Relations Committee, a member of the Executive Committee, and Vice-President of the College. She has served on various committees for the Association for Behavior and Cognitive Therapies, as well as other professional organizations, and on scientific panels for the US and Canadian governments. She served for 3 years as the treasurer of the Academy for Psychological Clinical Science, and served as Member-at-Large on the board of the Association for Psychological Science from 2010-2013, and on their nominating committee from 2013-2015. She served on the Social Sciences and Humanities Research Council Psychology Grants committee several times, chairing it twice. Her research has focused on the difficulties of self-regulation and self-change (the False Hope Syndrome), the influences of restrained eating and caloric restriction on cognition, emotion, and behavior, the influences of personality (in particular restrained eating, or chronic dieting), emotion, cognition and socio-cultural factors on eating behavior, and various aspects of body image, media influences and self-esteem. Her research is widely cited, so much so that she was listed by ISIHighlyCited.com as one of the world's most cited researchers (comprising less than one half of one percent of all currently publishing researchers). She won the University of Toronto-Mississauga Research Excellence Award in 2009, and has been an elected Fellow of the Royal Society of Canada since 2006.

Patricia Pliner received her Ph.D. at Columbia University and spent her entire professional career at the University of Toronto, beginning as an Assistant Professor in 1969 and retiring as a Professor in 2009; she is now Professor Emerita. She has served on the editorial boards of the Journal of Abnormal Psychology, the Journal of Research in Personality, Food Quality and Preference, and as an executive editor of Appetite. She has been a member of several grant selection committees for the Social Sciences and Humanities Research Council of Canada, serving in one instance as chair.  Her research has been funded by the Canada Council, the Addiction Research Foundation of Ontario, the Department of Health and Welfare Canada, the Ontario Ministry of Transportation and Communications, and the Social Sciences and Humanities Research Council of Canada.  Her research has focused on the effects of social factors on human eating behavior, including the study of both what people choose to eat and how much they eat.

Lenny R. Vartanian completed his undergraduate degree at Concordia University (Canada) in 1999, and his PhD at the University of Toronto in 2004. He then completed postdoctoral fellowships at Yale University and Cornell University, followed by a visiting position at Syracuse University. He moved to UNSW Sydney (Australia) in 2009 where he was promoted to Full Professor in 2018. His research focuses on the psychological aspects of eating and weight and has been supported by grants from the Australian Research Council. He has served on the editorial boards of Appetite, Health Psychology, and Body Image.

Read this book on SpringerLink

Services for this Book